UPDATED, April 22, 2016: This article was posted to announce the CPLC Assembly. It has been revised to include news from the Assembly. Today, the Carbon Pricing Panel, made up of 6 heads of state, as well as the leaders of the World Bank, IMF and OECD, released its Vision Statement, with new targets for carbon pricing coverage. 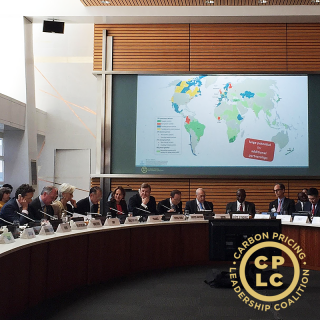 The inaugural High-Level Assembly of the Carbon Pricing Leadership Coalition  was held at the World Bank on Friday, April 15, 2016, during the 2016 Spring Meetings of the World Bank and the International Monetary Fund. The 90-minute meeting served as an administrative and working session of executive-level representatives of Coalition partners. Ségolène Royal, Minster of Environment for France, and Feike Sijbesma, CEO of Royal DSM, co-chaired the Assembly. They were joined at the table by Jim Yong Kim, World Bank Group President; Ban Ki-moon, United Nations Secretary-General; Christine Lagarde, Managing Director of the International Monetary Fund; Angel Gurría, Secretary-General of the Organisation for Economic Cooperation and Development, and Prime Minister Daniel Kablan Duncan of Côte d’Ivoire.

The Carbon Pricing Leadership Coalition is a first-of-its-kind global policy-making body made up of governments, intergovernmental agencies, non-governmental organizations, businesses and institutional investors. It was launched on the first day of the COP21 climate negotiations in Paris [PDF], after more than a year of coordination and collaborative planning among the founding partners—including more than 20 governments, more than 90 companies, and leading NGOs and institutional investors.

The implied mission of the CPLC is to identify and advance ways to build effective, transparent, equitable carbon pricing into the national climate action plans of all 195 nations that are parties to the UN Framework Convention on Climate Change, as part of their obligations under the Paris Agreement. Adding effective carbon pricing policies to national climate plans will enhance capacity throughout their economies and accelerate the pace of transition to climate-smart practices. 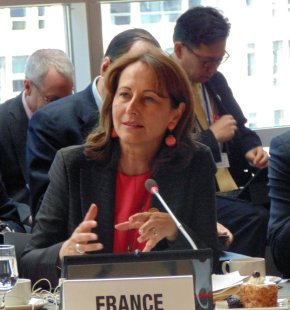 In her opening remarks to the inaugural governing Assembly, Minister Royal called for carbon pricing that is “high enough, significant enough to have a clear and rapid impact on various behaviors, namely on investment choices.” Royal, who is now also President of the Conference of the Parties to the UN climate treaty, added that “This is the key element of the Paris Agreement.”

World Bank President Dr. Jim Yong Kim cited downgraded forecasts for global economic growth and the rapid acceleration of climate impacts. Countering that slide will entail speeding investment into climate-smart energy and agriculture practices, to ensure we have the innovation and the development we need, without expanding the climate disruption that is degrading natural systems. In Kim’s own words:

The science is extremely clear. The economics are even clearer. There is strong agreement among economists that the most direct and certain path to reduce carbon emission is to price them. So the pollution becomes and operating cost which will create incentives for investments in low carbon solutions… Right now about 40 countries and 23 cities, states and provinces already put a price on carbon. Together these cover the equivalent of some 7 billion tons of carbon dioxide. This is a three fold increase over the past decade and we see some momentum but we must do better.

IMF Managing Director Christine Lagarde reminded the Assembly of work her team has done toward “getting prices right“, saying that differences in pricing levels between jurisdictions can represent effective ways to eliminate inefficiencies emerging from imbalances in the levels of externalized cost and harm in those economies. Seeking the perfect universal price level should not be the priority.

As diplomats and partners around the table offered their thoughts, we heard for the first time in an official multilateral meeting that the Coalition should work to build carbon pricing into all 195 nationally determined contributions (to the global climate response) by 2020. While this once seemed an impossible ambition, we now see more than 60 jurisdictions with some form of carbon pricing, more than 90 INDCs including some form of carbon pricing, and 195 nations agreeing to rapidly escalate the ambition of their climate action.

On April 22, Earth Day 2016, 167 nations are expected to sign the Paris Agreement, by far the largest number of countries to sign an international agreement in one day. UN Secretary General Ban Ki-moon reminded the Assembly that the previous record was 119 nations. The “Paris effect” is already speeding an investment shift, and the competition among nations to enter the clean energy economy of the 21st century will mean adding economically efficient carbon pricing to NDCs within the next four years is now a serious and necessary part of the global diplomatic effort.

The High-Level Assembly will serve as the chief administrative and governance body of the Coalition. A Secretariat, housed at the World Bank, will manage implementation and coordination, and partners will collaborate through three main working groups:

This new way of making policy flows from several years of collaboration between stakeholders, and from a series of global agreements in 2015 that call for multistakeholder multilateral partnerships that build capacity and expand the space for effective action. 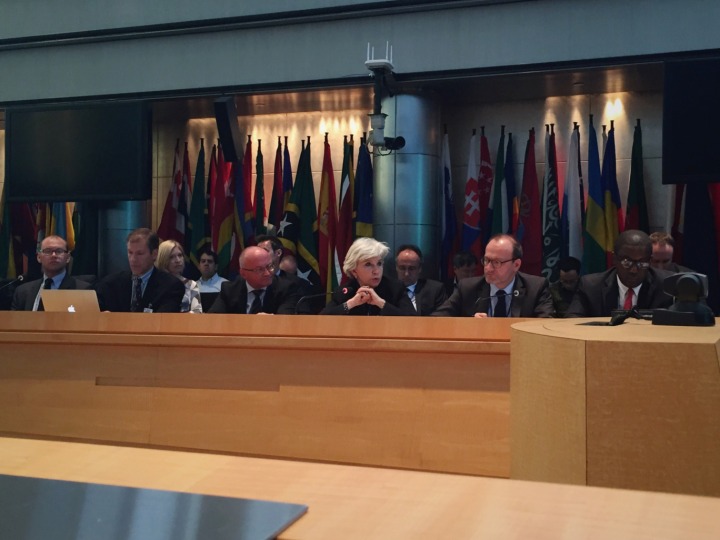 Senior executive-level representatives of CPLC partners also attended, and intervened in the Assembly. Yale University joined as the first academic partner in the Coalition. While the Coalition does not require concrete structural changes or policy endorsements from all partners, the participation of senior executives ensures collaborative decision-making at the Assembly will filter through the widest possible web of partners’ operations and relationships.

Even a small sample of CPLC partners demonstrates how this inclusive coalition can achieve worldwide economic and political impact:

The Working Groups are now beginning to detail the work they will do toward Building and Sharing the Evidence Base, Mobilizing Business, and Convening Leadership Dialogues. On evidence, there is a great deal of work already ongoing, much of it led by strategic partners, and new collaborative frameworks for information sharing will provide both a memory bank and a series of adaptive roadmaps, charting the way to full implementation.

Businesses are helping in the work of sharing the evidence, but are also building momentum by 1) learning to better assess their carbon liability, 2) pricing carbon internally, and 3) selecting carbon-free assets and practices, to build portfolio resilience and achieve a faster rate of innovation both internally and across the wider economic landscape.

The Leadership Dialogues will be oriented toward moving policy ideas and design elements into legal force. Already, the CPLC has been involved in national, regional and sectoral dialogues in Switzerland, India, and South Africa, with more planned for Chile, Mexico, Germany, and elsewhere.

On April 14, we convened a High-Level Dialogue, under Chatham House rules, alongside the World Bank and IMF Spring Meetings, focusing on how to trace the carbon pricing value chain. This dialogue series is just one example of how partners to the Coalition are working together to form new collaborative communities, share insights, and drive best practices into the field of play. 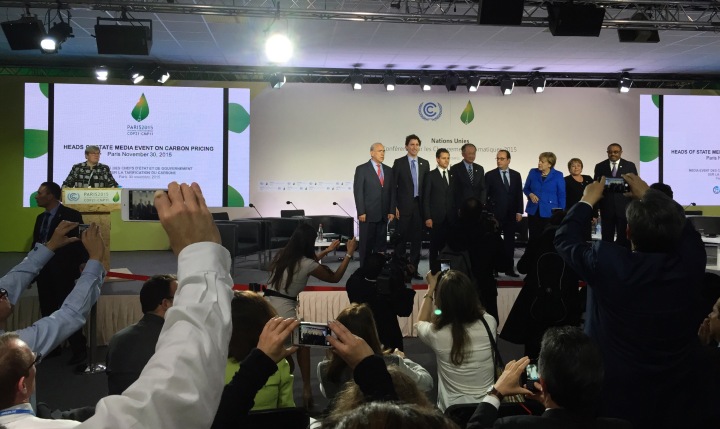 The Vision Statement put forward by the Carbon Pricing Panel on April 21, calls for expanding carbon pricing from where it is today—covering 12% of global greenhouse gas emissions—to 25% by 2020, and then doubling again within 10 years. This provides a clear and focused collective goal for the Coalition, with markers for what each new jurisdiction is contributing, as we move climate-smart economic strategies into place around the world.

In September 2015, the World Bank and the OECD released a report outlining proposed universal principles for successful carbon pricing. The principles were derived from conversations and consultations with a diverse range of partners, including advocates for emissions trading and for carbon taxes, who often disagree, as well as environmental NGOs and oil companies. The FASTER Principles are:

Though Coalition partners are not required to endorse this particular report, it is an excellent example of the kind of knowledge-sharing and collaborative consultation that will allow the CPLC to set high standards for effective, efficient carbon pricing strategies, and to ensure they are implemented in a way that is fair, transparent and generative of positive macroeconomic outcomes.

How the Coalition got started

In the summer of 2014, the World Bank’s climate team began building support for an open statement calling for a price on carbon. It would be introduced at the UN Secretary General’s Climate Summit, on September 23, 2014. By the time it was released, it had the support of more than 70 national and subnational governments, and more than 1,000 corporations, including major oil companies. The list of supporters accounted for 52% of global GDP. 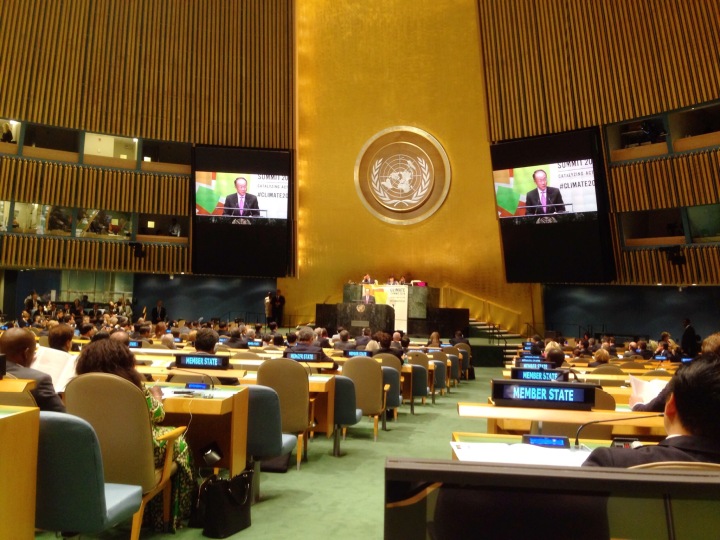 World Bank chief Dr. Jim Yong Kim has consistently reminded development advocates, civil society observers, world leaders, and global gatherings, that carbon pricing is a necessary part of any effort to build a climate-smart future. Just a couple weeks after the landmark 2014 UN Climate Summit in New York, Dr. Kim assured us personally, in the Civil Society Town Hall at World Bank Headquarters that he would continue the effort to build political will for carbon pricing and work with citizens’ groups. 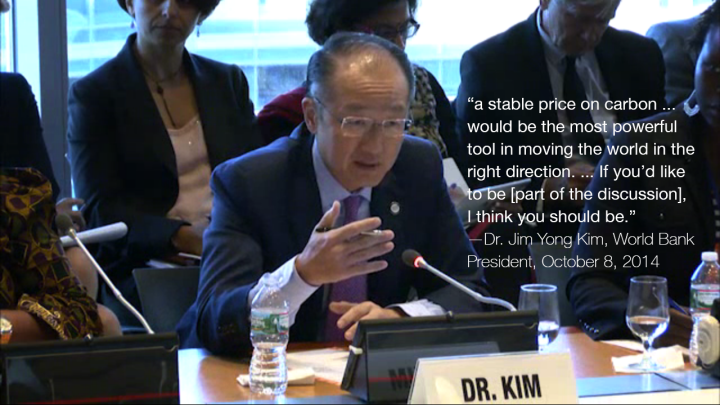 Since late 2014, that list of signatories, which included many non-governmental organizations, began to come together to talk about how to work for deployment of smart carbon pricing strategies. Throughout 2015, key strategic partners joined meetings where oil companies sat with environmental groups and major national governments, and discussed a way to collaborate going forward. 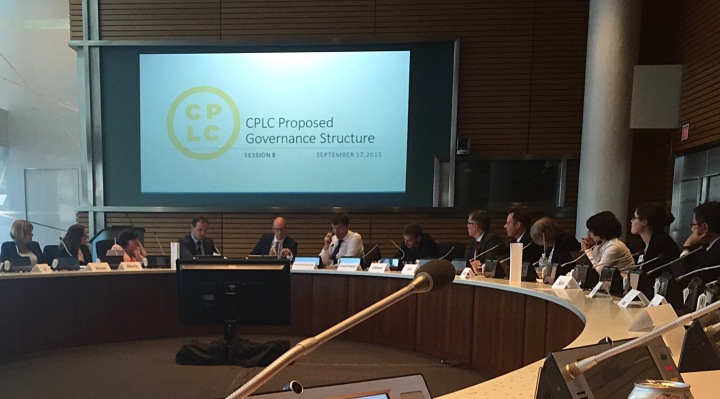 Building on the Paris Agreement

It was said by many that “carbon pricing [would not be] on the table in Paris”. That idea came from a misconception about what the table is made of. Many believe the Paris table is the text of a new climate treaty. In fact, it is four pillars:

With the official launch on November 30 in Paris, the Carbon Pricing Leadership Coalition became one of these action platforms. It will be doing business no matter what happens to the other three pillars. 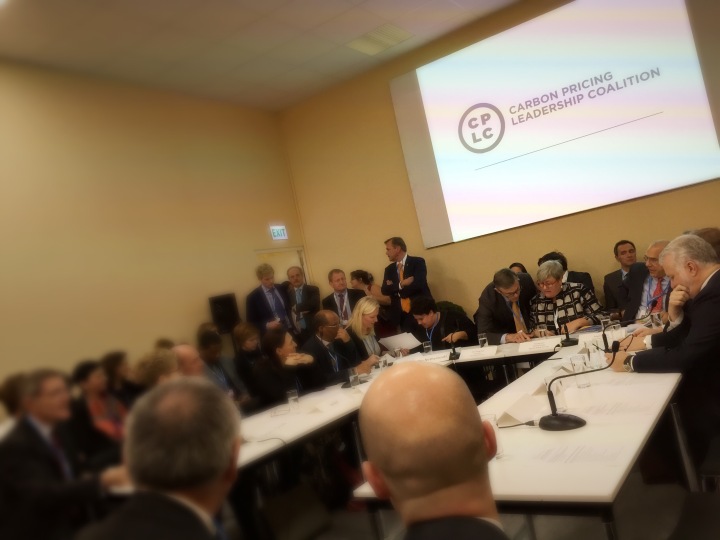 Supported by a high-level panel of heads of government, the CPLC will bring the public and private sectors together, with multilateral bodies and NGOs, to ensure the principles and policy design details relating to carbon pricing that are anchored in the text of the Paris Agreement, are brought into legal force in ways that optimize outcomes for climate stability, national economies, and quality of life for people around the world.

The Carbon Pricing Leadership Coalition is a breakthrough for inclusive global policy-making. In Paris, we said the work would be beginning, after the launch on November 30. This week in Washington, DC, the Working Groups and the High-Level Assembly had their first in-person meetings under the fully active framework of the CPLC. NGOs aiming to decarbonize the global economy and institutions of research and scholarship will join major oil and gas companies and major emitters—both nations and businesses—in a dialogue of equals.

The inaugural High-Level Assembly of the CPLC means the well-designed global transition to a climate-smart economy is now formally underway. 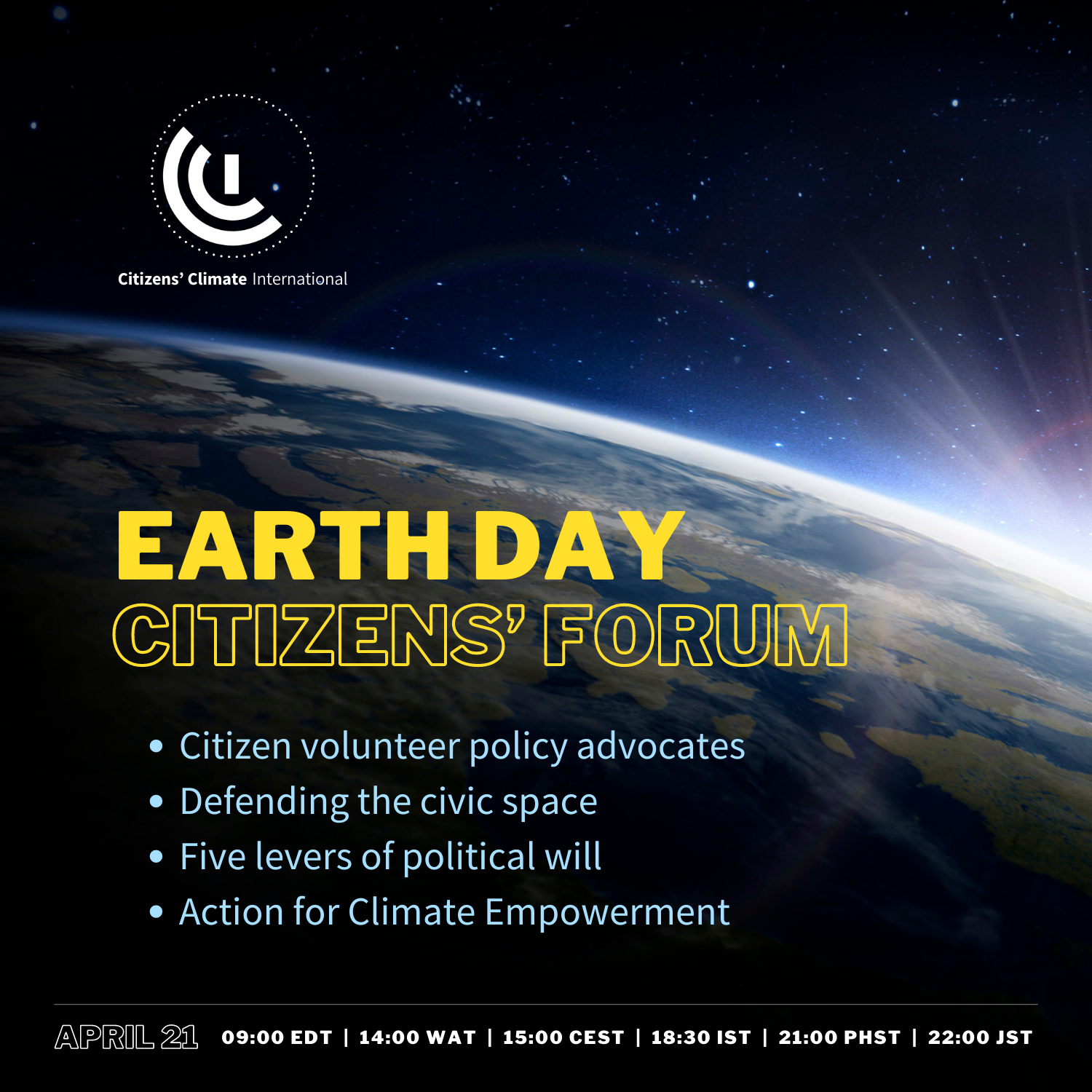