For the first 12 days of December, our team was on the ground in Paris for the COP21, engaging with peers, meeting with negotiators, publishing reports, interviewing participants, and working to support coalition efforts that would add smarter policies, actionable language and serious principles, to the Paris Agreement. During more than a year of planning for this work and defining our goals, I had the privilege of discussing on various occasions with senior diplomats how the Paris climate talks could serve as an irreversible expansion of the civic space. Paris could mark a new step forward in the work of building democratic processes around the world.

Two weeks before the historic negotiations, France experienced the worst terrorist attack in its history. A state of emergency was declared, and the fear was that we would see a devastating crackdown on public participation. Expanding the civic space looked like it would no longer be a priority for most governments, certainly not during the COP21.

In an open letter, I expressed the sympathy of our team for the people of France, and urged Pres. Hollande to welcome the tens of thousands of global citizens who would travel to the French capital, despite the increased threat level. I asked him to honor the universal value of open civic participation. Many others did this in other ways, and tens of thousands of delegates, advocates, and engaged citizens, from all over the world, traveled to Paris to do their part. Despite the closing down of multiple major demonstrations, the COP21 was in many ways a breakthrough for citizen participation in global processes. Participants and observers from around the world supported the negotiating process on their own terms, starting from their own values, and calling for service to the people of the world, to ecological systems, and to future generations, as the standard.

The Paris Agreement is the result of hundreds of thousands of people consciously working to improve the human condition and the condition of nature with respect to our activities, over more than two decades. It is also the anchor of a vast new terrain of action and engagement, to build climate solutions into the everyday functioning of human societies across the world.

As we close out 2015, I want to mark this watershed moment in the evolution of human cooperation across the planet: 2015 has given us global agreements on international finance and transparency, sustainable development, and climate action. 195 nations have agreed to work together to eliminate the routine use of climate-forcing compounds from our economies.

The Paris Agreement honors the principle of intergenerational equity, meaning as we make policies and chart our respective strategies for long-term investment, we must not externalize costs we could avoid by forcing future generations to carry the burden. Non-state collaborators are recognized as active participants in the design and implementation of a climate-smart future.

Cynics have called the Sustainable Development Goals and the Paris Agreement “too complicated” to ever be fully fleshed out in practice… but Pope Francis has given us an easy way to talk about these global agreements to essentially “get everything right” from now on. In his call for integral ecology as the standard for all policy everywhere, Pope Francis has put to the world the simple moral challenge: If you know you can make one choice and do needless harm, or make another and do good, why not simply choose to do good?

70 years after its founding, the United Nations has given us real and actionable opportunities for implementing not just a  complex climate or development agenda, but the Golden Rule. The wide angle view of the global policy landscape, as seen from the Paris climate talks, is of unprecedented opportunities to build sustainable prosperity through ethical action. 2016 is the year we begin to do this with the full weight of the international system, and national economies, behind us. 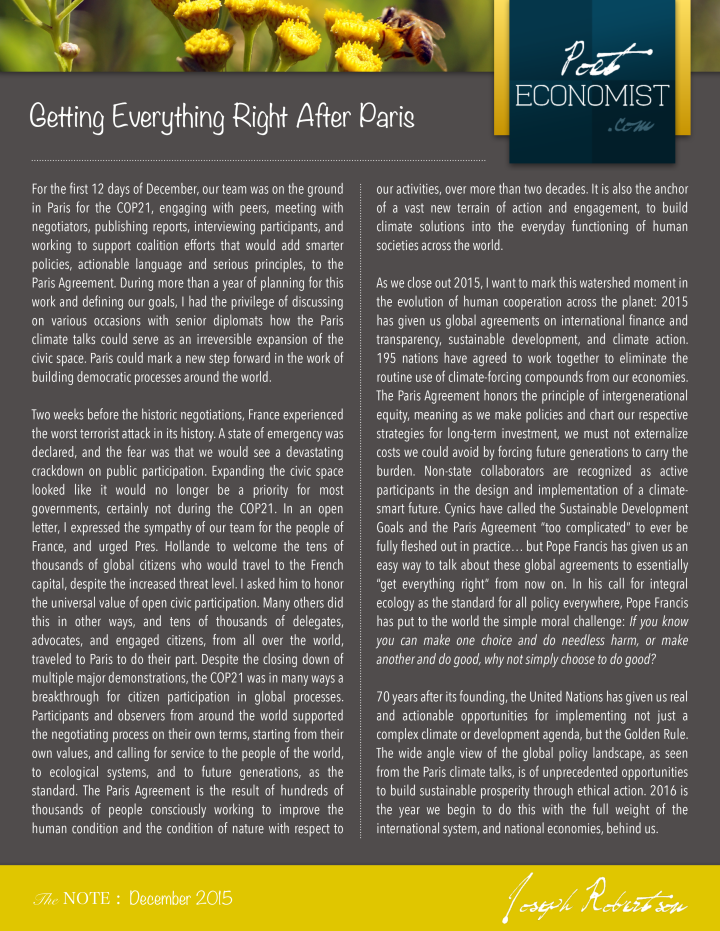